The WJC also released a comprehensive report on cyberhate, finding that the overwhelming majority of anti-Semitic content on the internet emanates from the United States, followed by Germany. More than 63 percent of this content could be found on Twitter.

In their resolution, the delegates urged internet companies to urgently implement mechanisms to remove illegal and offensive hate speech from their platforms. The assembly welcomed initiatives by the European Commission and the government of Germany imposing clear standards and penalties for violators in this regard. The resolution also urged internet retailers such as Amazon to refrain from the sale of material such as books that deny the Holocaust or incite to hatred. 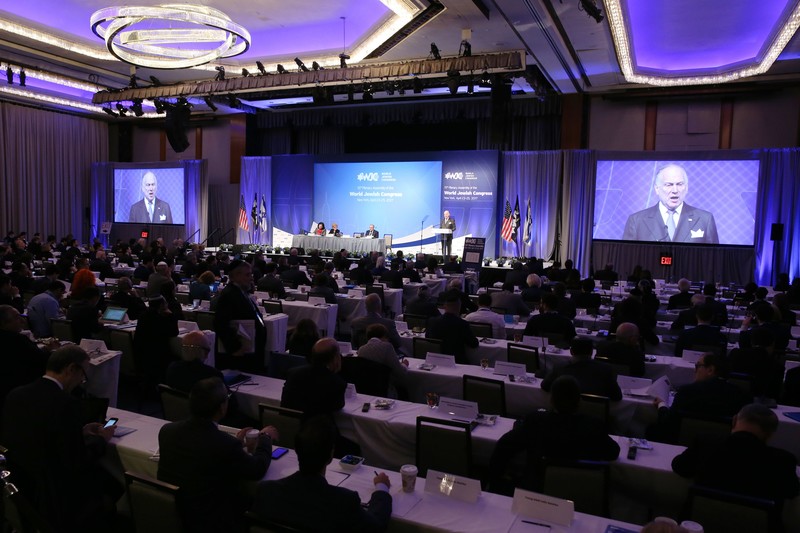 The resolution on anti-Semitism called on “law-enforcement agencies in all countries to closely monitor all anti-Semitic acts, including Holocaust denial, and to enforce existing legislation proscribing hate speech and acts to the fullest extent.” The WJC also urges countries worldwide to adopt a common and binding definition of anti-Semitism.

In a resolution on extremist parties, the delegates affirmed a policy which calls for “the creation of a ‘cordon sanitaire’ [barrier] on all levels (local, regional, national, European) vis-à-vis extremist parties, and for the adoption of a policy of ‘no platform’ to those parties and groups in order to ensure that their influence is reduced or eliminated.” The resolution text specifically mentioned “Jobbik in Hungary, FPÖ in Austria, AfD in Germany and Front National in France.”

The delegates representing Jewish communities in 90 countries world-wide also called for renewed efforts to reach a peace agreement between Israelis and Palestinians, and reaffirmed previous resolutions adopted by the World Jewish Congress declaring that “two-states for two peoples is the only workable, realistic basis for a true and lasting peace.”

Other resolutions adopted dealt with the security of Jewish communities, Holocaust obfuscation, UNESCO’s stance on holy sites in Israel, the 50th anniversary of the reunification of Jerusalem, and Jewish student activism.

The following were elected:

Chairman of the Governing Board: David de Rothschild, France

Coordination Committee of the Jewish Organizations of Belgium

Federation of Jewish Communities of the Czech Republic

Central Board of Jewish Communities in Greece

Confederation of Jewish Associations of Venezuela

As ad personam Members of the Executive were elected:

At its first meeting, the new Executive Committee co-opted the following as its members:

In addition, the Executive co-opted the following as WJC vice-presidents:

Elizabeth Holmes: The 'Valley of Hype' behind the rise and fall of Theranos [documentary]