When Christians Blow the Shofar, It’s a Wake-Up Call for Jews

(JNS) They were blowing the shofar, but it wasn’t Rosh Hashanah.

On Jan. 5, 2021, the sound of the ram’s horn echoed in the streets of Washington, DC, as participants in the Jericho March circled the capitol in a re-enactment of Joshua’s siege on the ancient city. For Jewish observers, it was a puzzling scene. “Are you going to do the shevarim as well?” one reporter asked a puff-cheeked protester, referring to the rhythmic blowing pattern used in Jewish tradition. He got a blank stare in return.

But for Robert Weinger, a master shofar-blower who lives in Israel, the connection was obvious. For years now, most of the visitors to his shofar center in the Judean Desert have been Evangelical Christians. Seeking to follow in the footsteps of the ancient Israelites, they brought back shofars to use at church meetings and special occasions.

Weinger, who is Jewish, has come to see himself as a kind of ambassador for the instrument. “We’re the people of the book, but we don’t read our own book,” he told JNS. “Historically, the shofar was used as a call to battle—an alarm, a shout of victory. There’s a mystery behind the shofar. It brings heaven down to earth.”

The appropriation of the shofar by Christian groups—and certainly, its use in political contexts—is controversial, to say the least. Yet at a time when many Jews associate the shofar with a few uncomfortable hours spent in synagogue once a year, it’s also a wake-up call to re-examine the extraordinary, paradoxical role the shofar has played in Jewish history … a story that continues to reverberate in Jewish practice today.

The first shofar blast in the Bible is a supernatural one: at the foot of Mount Sinai, the Jews are gathered and hear the sound of the shofar, presumably from the lips of God Himself. But for nomadic groups like the ancient Israelites, it was a familiar sound.

Shepherds had long used animal horn instruments to call their flocks and communicate with one another, says Jonathan Friedmann, professor of Jewish music history at the Academy for Jewish Religion California and editor of Qol Tamid: The Shofar in Ritual, History and Culture. “Because the horn was relatively easy to fashion and didn’t require great musical skill, it was, in many ways, a ‘people’s instrument.’ There is an etymological link between the Hebrew term for “shepherd,” ro’eh, and the term we identify with shofar blasts, t’ruah.” 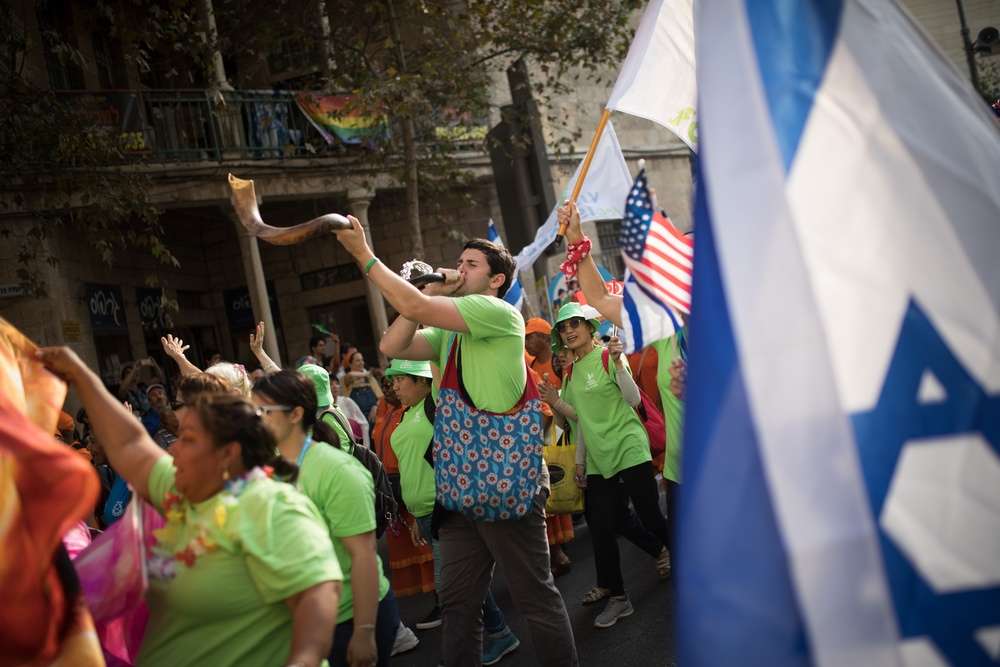 Evangelical Christian supporters of Israel blow the shofar during the Jerusalem March that takes place during Sukkot. Photo: Hadas Parush/Flash90

The sound of a ‘broken blast’

The Bible elevates the shofar into the realm of the sacred: Leviticus proclaims the first day of the seventh month—Rosh Hashanah—yom t’ruah, a “day of blasts.” On Yom Kippur, every 49 years, the Jubilee is ushered in with the sound of a “broken blast.” (In the Jewish Diaspora, this practice is commemorated by blowing the shofar at the end of every Yom Kippur service.) In the Temple, priests blew shofars to mark the new moon and as part of the regular musical service of the Levites.

Yet the shofar never lost its status as a “people’s instrument.”

Even in Temple times, it was used to warn of approaching danger, mark the onset of Shabbat (before the advent of clocks) and crown a new king—a practice preserved in modern-day Israel when a new president is sworn in. And it was used in war. In the book of Judges, Gideon and his army of 300 intimidate the much more numerous Midianites with some primitive pyrotechnics accompanied by shofar blasts. Perhaps most famously, at the command of God and under the direction of Joshua, the walls of Jericho collapse at the sound of seven shofars.

After the destruction of the Temple, the shofar’s role gradually diminished. Prayer and ritual replaced the sacrificial service, and new technologies made non-ritual shofar blasts obsolete. But the sages managed to carve out a place for the instrument in post-Temple Judaism. “In order to preserve a biblical anchor for the New Year, the sages decided the shofar was not really a musical instrument, which couldn’t be played on holy days, and instead mandated its use,” says Friedmann.

Soon, the horn was making a once-a-year cameo on Rosh Hashanah. 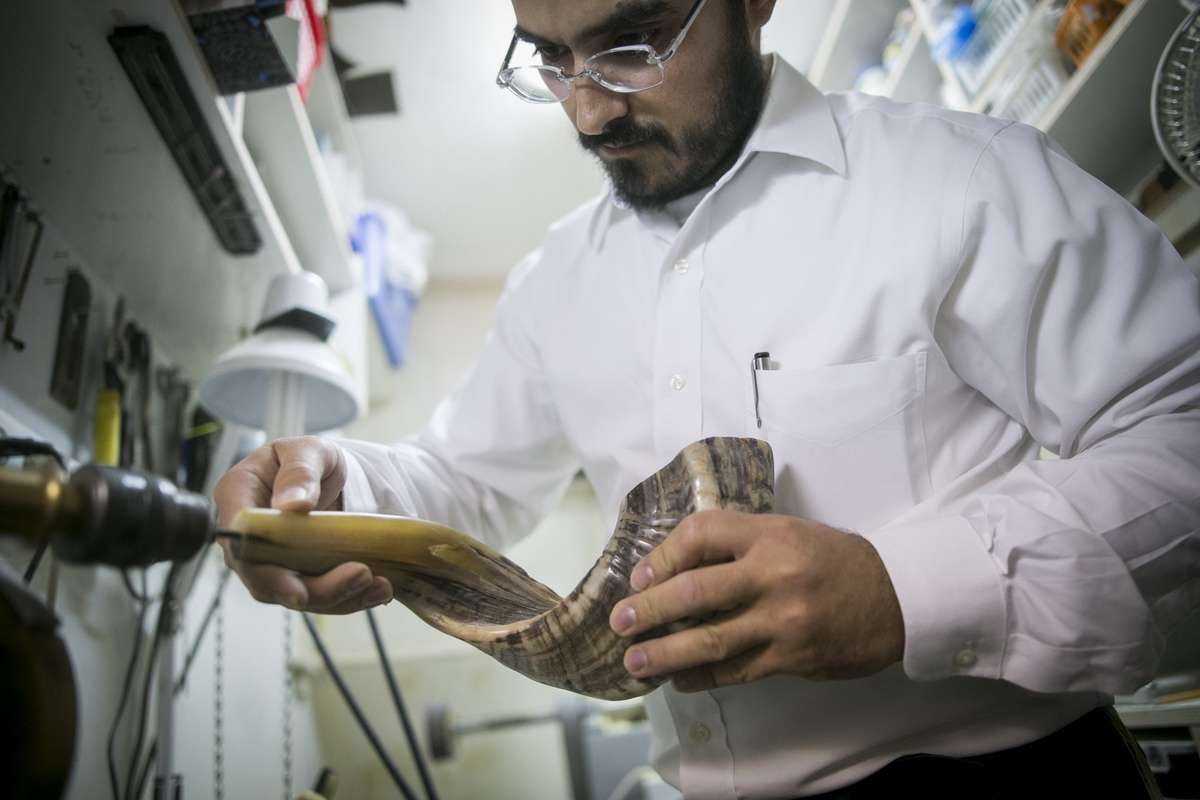 A Jewish craftsman prepares and polishes a new shofar. The biblical instrument can be made out of any animal horn, except that of a cow. Photo: Yonatan Sindel/Flash90

The shofar’s diverse purposes were not lost, however. Instead, they infused the Jewish New Year with spiritual significance: The use of a sheep’s horn, the rabbis explained, was a reference to the binding of Isaac, when Abraham sacrificed a ram in place of his son, eliciting God’s eternal mercy for the Jewish people. (While other animal horns may be used, cows’ horns are forbidden, as they evoke the sin of the Golden Calf.)

Rosh Hashanah also became the day when, with shofar blasts, the Jewish people crown God as their king. And the Talmud relates that the shofar is a potent weapon in the battle with “the Accuser”—also known as Satan—the spiritual force that seeks to do Jews harm.

Laden with such history and significance, it’s little wonder that in modern times, the shofar became a symbol of Jewish identity and continuity, blown in Auschwitz, at the end of World War II and at the liberated Western Wall in 1967. Nor is it surprising that this potent symbol is appealing to other groups. But though its uses have been diverse and sometimes contradictory, the shofar is essentially and irrevocably Jewish, and it will remain so until the day when an era of eternal peace and justice will be ushered in, with—as the prophet Isaiah relates—the blast of a ram’s horn.

Healthcare During the High Holidays

Russia is weaponizing its data laws against foreign…

How powerful is the Israel lobby? – Mondoweiss