World Jewish Congress President Ronald S. Lauder on Sunday urged the government in Pretoria to work together with Israel to achieve a peaceful solution to the conflict with the Palestinians. In an address to a conference of the South African Jewish Board of Deputies in Johannesburg, Lauder said: “South Africa can show that compromise in the interest of peace with respect for the other side can lead to a better future for all.” 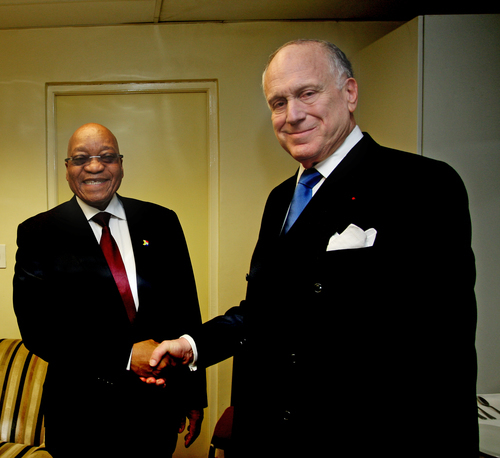 “We still believe the only possible way to achieve a real peace between Israel and the Palestinian people is a viable two-state solution. Two states for two peoples – the Jewish State of Israel and a Palestinian State for Palestinians – living side-by-side in peace and security,” the WJC president added. “I am not naïve. I am aware of the difficulties. But I believe South Africa can engage all parties and explain why violence must be rejected. South Africa can show that compromise in the interest of peace with respect for the other side can lead to a better future for all. And South Africa can show the importance of democratic values and the acceptance of other cultures.”

President Jacob Zuma, the head of the African National Congress, emphasized that his government supported the establishment of a sovereign Palestinian state and said that this in no way contradicted its support of Israel. He added that South Africa would continue to invite to its shores the different groups involved in the peace process “so as to share with them our past experiences and to also exchange views with them.” He did not mention by name the visit of a Hamas delegation to South Africa last month, which caused great concern among the local Jewish community and in Israel.

“Our government holds the view that our support for a free Palestine is in no way against the existence of the State of Israel and the safety of the Israeli nation,” Zuma stressed. “On the contrary, we believe that the establishment of the State of Palestine will lay a solid foundation for lasting peace in the Middle East.” The South African president urged “our Jewish community to remain seized with these efforts and to also make their contribution in bringing about a peaceful Middle East.

“South Africa has something to offer in the promotion of peace and tolerance in the world,” he added.

“We need to never lose track of that history of unity and non-racialism even now as we build a new society,” Zuma added. “This is a South Africa that shuns racism, anti-Semitism and all forms of hate and discrimination against anyone based on their race or religion.”

French philosopher Bernard Henri-Levy also addressed the conference, outlining what he called the three pillars of anti-Semitism today: Anti-Zionism, Holocaust denial and rivalry of victims. “We are the same in Paris [now] as the Jews in Israel who face these stabbings every day,” said Henri-Levy.

In addition to his meeting with Zuma, Lauder met during his visit with senior African leaders, among them Dlamini Zuma, chairperson of the African Union Commission, Gwede Mantashe, secretary-general of the African National Congress (ANC), minister of the Presidency Jeff Radebe, and businessman Tokyo Sexwale, who is a contender for presidency of the international football association FIFA.