Seasoned diplomat Richard Haass tells WJC: Israel, US must get back to confiding in each other

The World Jewish Congress American Section on Monday welcomed Richard Haass, the president of the Council on Foreign Relations, and a seasoned American diplomat who has served under four presidents over the course of his rich career.

World Jewish Congress President Ronald Lauder praised Haass, who he has known for more three decades, as a “man whose life work has been nothing short of fantastic.” Haass, for his part, called Lauder a “prime example that individuals can make a difference.”

In an off-the-record briefing, Haass enumerated the challenges facing the Middle East and the changing political climate, from ISIS to Iran to the Syrian regime. “The old Middle East order is gone,” Haass said, describing the future scenarios that might arise from the current conflict and, referencing Mark Twain, adding that “history doesn’t repeat itself, but it rhymes.”

Expounding on how these challenges might affect countries around the world, Haass said: “The Middle East isn’t Las Vegas. What happens there doesn’t stay there. The idea that we can somehow quarantine the Middle East is simply wrong.” 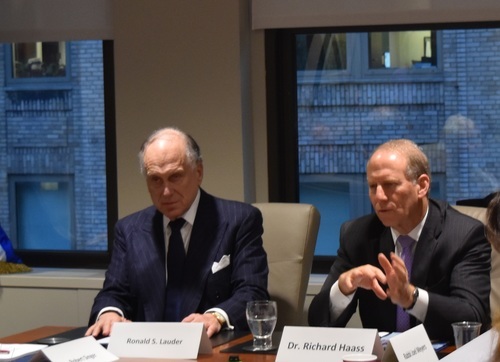 With regard to the US’ relationship with Israel, Haass recalled the trust and strong ties he has witnessed under past administrations and stressed that “we must get back to a relationship in which we can confide in Israel and they can confide in the US.”

Haass was born in Brooklyn to Jewish parents. He has served as the President of the Council on Foreign Relations since 2003. Prior to that, he served as the US Special Envoy to Northern Ireland (2001-2003), and in 2013, returned there to chair the multi-party negotiations that provided the foundation for the 2014 Stormont House Agreement.

Haass also served as special assistant to President George H.W. Bush and as a senior director on the National Security Council. He was also director of policy planning for the State Department, where he served as principal adviser to Secretary of State Colin Powell.

With the rank of ambassador, Dr. Haass received the State Department’s Distinguished Honor Award for his work on Northern Ireland and Afghanistan. He was also awarded a Presidential Citizen’s Medal for his contributions to the development of US policy during Operations Desert Shield and Desert Storm.

The Vatican’s Diplomacy in Central Asia – The Diplomat

From Whence Comes The Black Nobility Of Europe

A Jewish journalist managed to sneak into the city of Mecca.