When I first heard the sad news that Sir Evelyn de Rothschild, the scion of the famous Jewish banking family and former head of his family’s merchant bank in London, had died on November 7, 2022 at the age of 91, I phoned my mother.

My mom’s first job was Sir Evelyn’s bank and she has warm memories of the bank owner’s kindly son, who was learning the business and would soon become the bank’s new chairman.  He and his family were popular with the workers, willing to chat, and to give their fellow Jews a job when few other banks would do so.

When my mother graduated in 1958, had more qualifications than any girls in her graduating class, yet found herself turned down for the banking positions she hoped to land.  It was incredibly difficult for Jews to get a job. “The only bank willing to give me a chance was the Rothschilds,” she said.

For generations, the Rothschild’s sprawling family has given rise to forward-thinking activists and social reformers – including the late Sir Evelyn.

Sir Evelyn de Rothschild was born in 1931. His childhood was marked by the rise in harassment and persecution of Jews across Europe, which directly affected his many relatives living across the continent.  Sir Evelyn’s mother was Yvonne Lydia Louise de Rothschild, the scion of a Jewish banking family from Antwerp.  She and her husband Anthony de Rothschild lived a life of luxury, dividing their time between London and Ascott, their beautiful country house.

Yet with Jews in Europe in danger, both Yvonne and Anthony sprang into action.  When Hitler came to power in 1933, Yvonne helped found a society to help German-Jewish women; she worked tirelessly to raise funds and awareness and brought hundreds of German Jewish children to Britain and to the Land of Israel.

During World War II, they turned their beautiful house Ascott into a hospital and a refuge for veterans who’d been bombed out of their London home.  Ascott also became a repository for items evacuated for safekeeping from museums and synagogues across London.

Rothschild Family’s Origins in a Ghetto

The Rothschild bank originated in the 1700s in the Jewish Ghetto of Frankfurt in Germany.  At the time, Jews were confined to a tiny ghetto that curved around the eastern edge of the city.  Historian Natalie Livingstone describes the world these Jews inhabited:

…the Judengasse, or ‘Jews’ Lane,’ (was the ghetto’s primary street) and (a Jew) could expect to live her life within its confines. Frankfurt Jews were born among the Judengasse’s densely packed houses, they worshiped in its shul and shopped at its market; they studied, worked and died there…Over the centuries, with nowhere else to go, the buildings had been forced upwards, and cantilevered overhangs had been constructed to maximize living space on the same small footprint.”  There was little daylight and “the dense, smoky air and the open sewers made it hard to breathe.  (Quoted in The Women of Rothschild: The Untold Story of the World’s Most Famous Dynasty by Natalie Livingstone. John Murray: 2001)

Jews were allowed out of the ghetto only during the day, with the exception of Christian holidays when the ghetto gates remained locked.  All of Frankfurt’s Christians had the right to stop any Jew found outside the ghetto and shout Jud, mach mores! – “Jew, do your duty!” The unfortunate Jew was obliged to remove his hat and step aside.  Restricted from working in most industries, many Jews worked in the money-lending trade. 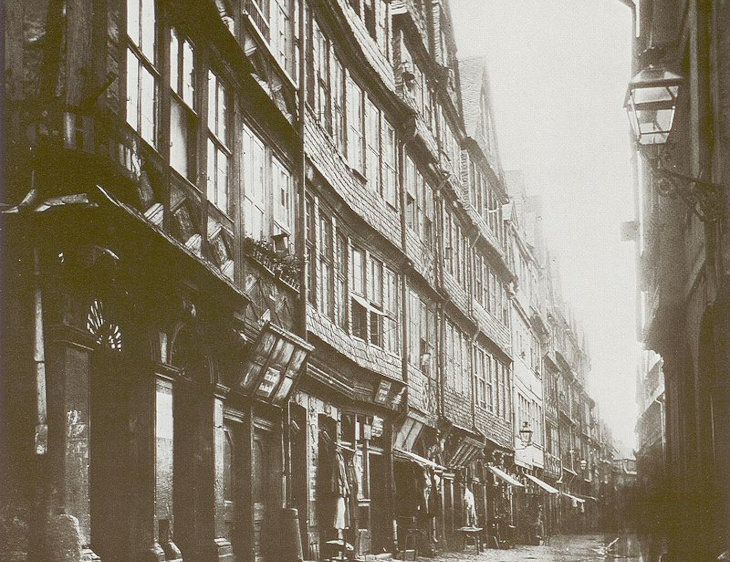 The Judengasse, Jews’ Lane in Frankfurt

The patriarch of the Rothschild family was Amschel Moses, a businessman who was known far and wide for his intense piety.  He worked as an assistant to a local rabbi, helping to distribute weekly funds to the poor.  One day, when the weekly charity collection couldn’t be found, Amschel supplied the missing funds out of his own accounts, a seeming confession that it had been he who took the money.  Later on, when the money was found, Amschel explained that he didn’t want the poor to suffer by not receiving their weekly allotment, and was willing for people to think he was a thief rather than see Frankfurt’s poor Jews go without. 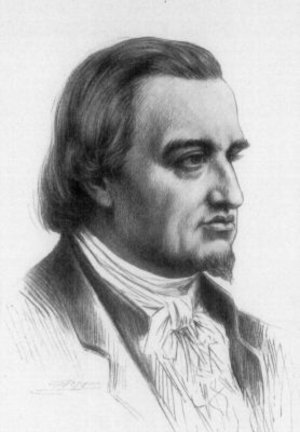 Amschel died in 1757. His tombstone describes him as “A man who observed the prescribed time for the study of Torah.”

When Amschel died, his son Mayer was studying in a yeshiva.  Now the head of the family, Mayer left school to apprentice with a banking firm in Hanover.  Eventually, Mayer, along with his wife Gutle, built up their own successful lending house, still living in Frankfurt’s ghetto.

Despite their wealth, they lived in a cramped house where they and their ten children slept together in one room.  Mayer’s five sons went on to found their own Rothschild financial companies in five different European cities. Mayer’s son Amschel remained in Frankfurt; Karl built up a bank in Naples; Jakob founded the Rothschild Freres company in Paris; Nathan founded the N. M. Rothschild bank in London; Solomon built up his own bank in Vienna.  After the Napoleonic Wars, the Rothschild banking companies were instrumental in helping rebuild Europe, creating many of the modern banking mechanisms we know of today along the way.

Building the Land of Israel

One of the most beloved Rothschild scions was Edmond James de Rothschild and his wife Adelheid.  When Jewish immigrants began building new farming settlements in the Land of Israel in the late 1800s and early 1900s, Edmond and Adelheid supported many of these endeavors, providing backing for 44 Jewish towns and farms. 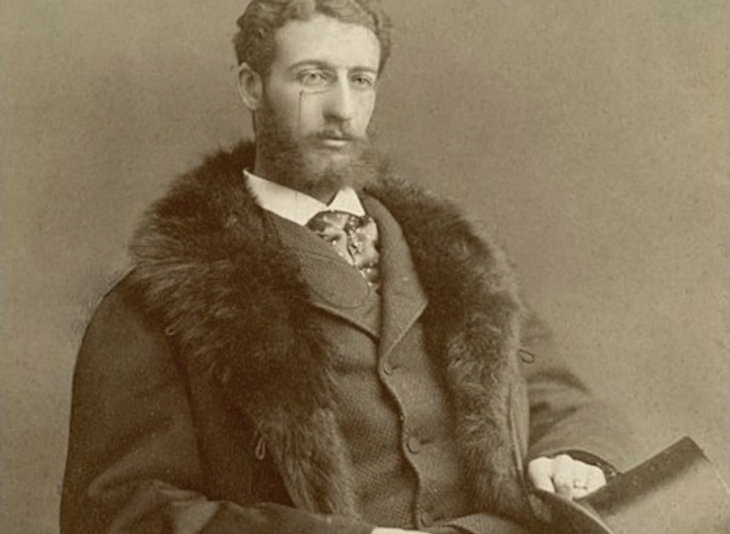 Edmond and Adelheid died in Paris in the 1930s.  Once the State of Israel was established, their remains were brought to Israel and reburied between two of the towns they helped found.  Prime Minister David Ben Gurion said at their funeral: “I doubt that, in the entire history of the Jewish people in the Diaspora, a period of 2,000 years, one could ever find a man comparable in stature to the incredible character that was the Baron Edmond de Rothschild – the builder of the Jewish Yishuv (community) in our renewed homeland.”

“Rothschild” is sometimes used as shorthand for fabulous wealth – and sometimes simply as a shorthand for “Jews”.  According to the Anti-Defamation League, “The Rothschilds are a Jewish banking family who have been accused of secretly controlling the economy, manipulating the weather, and profiting from wars.  “Rothschild has become a generic term for greedy and manipulative Jewish billionaires.” 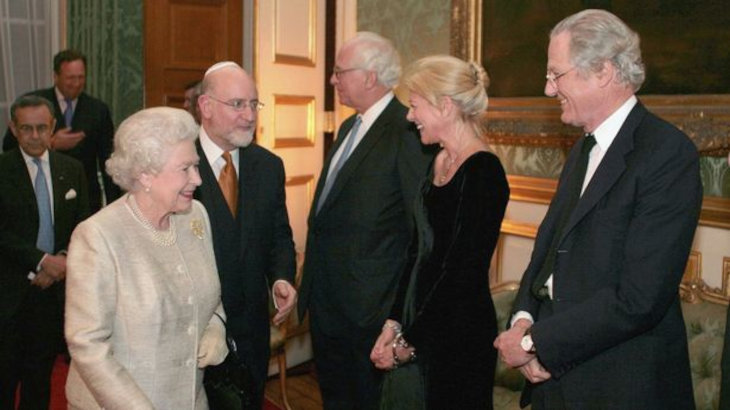 Sir Evelyn de Rothschild was certainly a wealthy Jewish banking professional who socialized with celebrities, but the negative anti-Jewish stereotypes that are associated with his name fail to capture his intense work ethic, and the high esteem with which he was held by everyone who worked with and knew him.  After his father retired as chairman of N.M. Rothschild in 1961, Sir Evelyn gave up much of his playboy lifestyle – particularly his beloved horseback riding – to come back to London and work in the family business.

Sir Evelyn’s guiding principle was to uphold the good name of his illustrious family.  “And uphold it he did,” noted The Economist, where he served as chairman for 17 years.  Instead of the cartoonish view of the Rothschilds as effortlessly wealthy, The Economist noted that it wasn’t always easy to keep the N.M. Rothschilds bank afloat.  “He kept it small…immune from the big-time-investment-banking model copied from New York.”  Sir Evelyn eventually ensured N.M. Rothschild’s future by merging it with a French Rothschild bank. 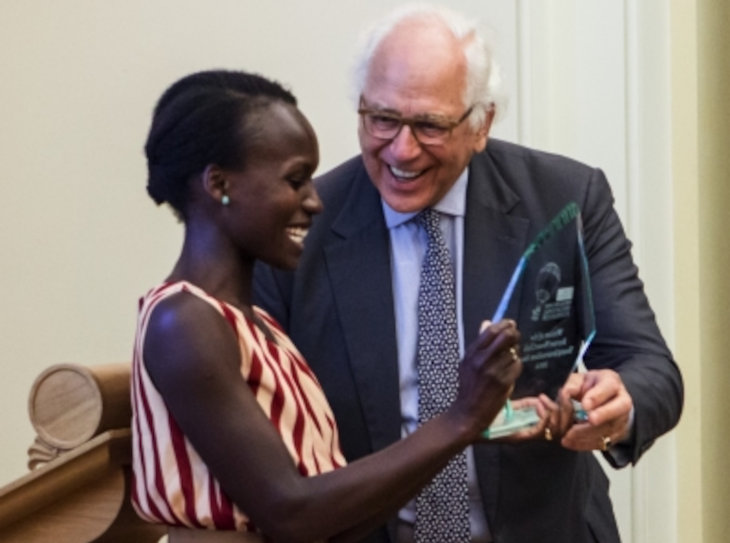 Sir Evelyn’s most profound legacy is the charity he started in 1967, the Eranda Rothschild Foundation.  He named it for himself as well as his two sisters, Renée and Anne. It supports medical research, social programs and the arts in Britain and Israel, and offers a lasting testament to a man who worked hard to uphold his family’s ideals of integrity, charity, and commitment to Israeli causes.

Paying for Dinner – The Bulwark

‘Hole in the Roof’ is a Dallas Cowboys adventure, full of surprises

Trump Was Tricked Into Dining With Too Many Antisemites