The rabbi doesn’t exist, but the shop is very real — and it’s the reentry point into public life for Audrey Gelman, the Jewish entrepreneur who stepped away from public life in 2020 amid criticism of The Wing, the coworking space for women that she cofounded in 2016.

The store, The Six Bells, is animated by an elaborate mythology around the fictional village of Barrow’s Green. According to the store’s website, the hamlet of 640 families represents the “little world, far away” from which the store’s eclectic products are sourced.

At the center of Barrow’s Green stands a courthouse that’s flanked by a church and synagogue, according to an illustrated map on The Six Bell’s website. The synagogue has 14 families as members and had fallen into disrepair before Frumkin took over, the website says, adding that Frumkin, whose portrait shows him wearing a long beard and black kippah, “often joins with the town’s Vicar for interdenominational services, and enjoys watching cricket.” 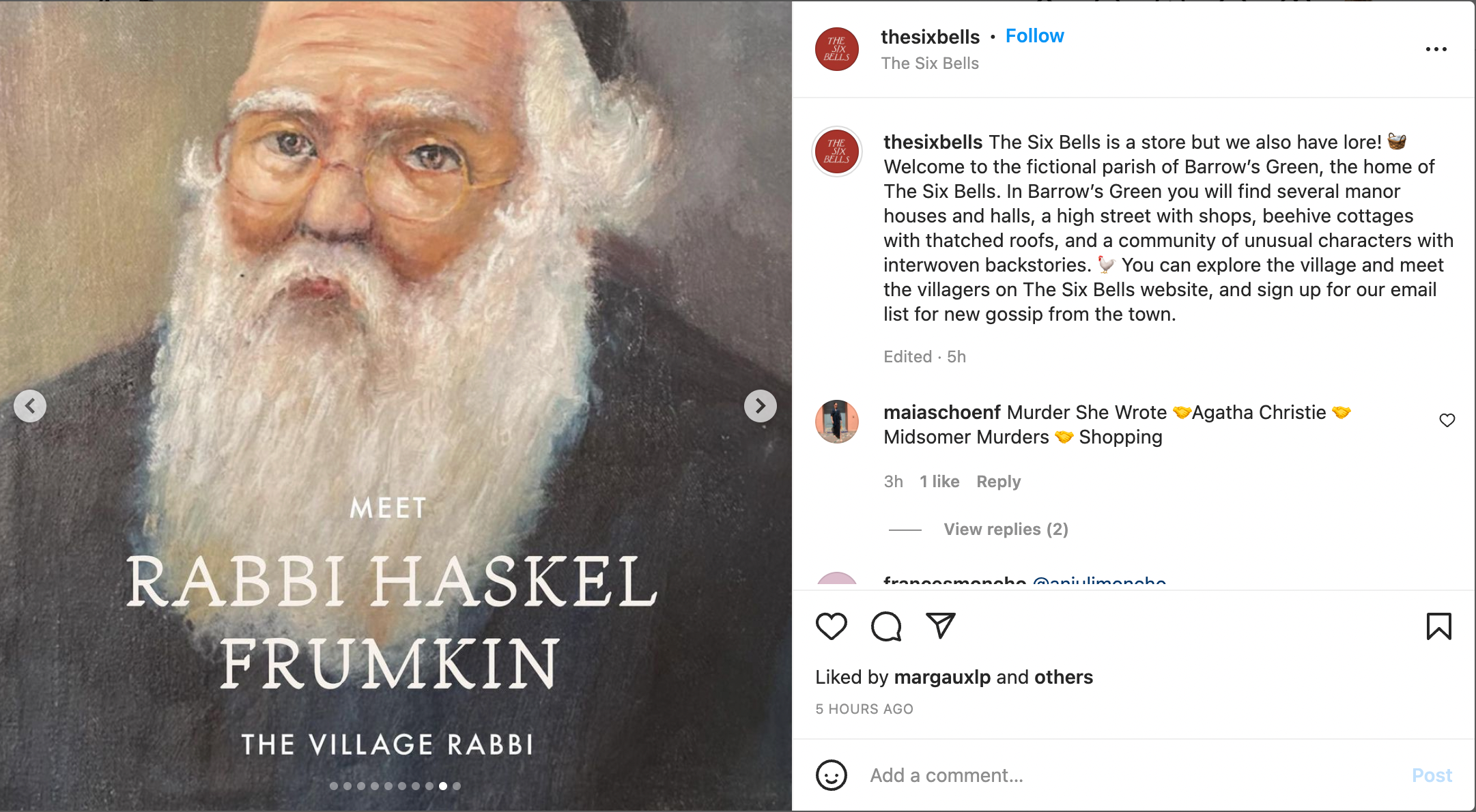 Rabbi Haskel Frumkin is part of the mythology of The Six Bells, a new homewares store in Brooklyn. (Instagram)

The Six Bells is the first new venture for Gelman since she abruptly resigned from The Wing in June 2020, as the coworking space brand came under criticism amid the national reckoning over race spurred by the murder of George Floyd.

Gelman — whose first prominent roles were as the spokesperson for Scott Stringer, the Jewish New York City politician who recently finished a stint as comptroller, and as best friend of Jewish artist Lena Dunham — had been accused of overseeing a workplace that was hostile to women of color.

In the two years since, Gelman has laid low, spending time in the Ditmas Park home she purchased in 2020 with her husband Ilan Zechory, the Jewish founder of Genius, a digital annotation company. The pair had a son, Sidney, in September 2019.

The Six Bells’ Instagram account contains little additional information, having posted inspiration photos for the last several months with the main engagement appearing to be comments from Gelman’s grandmother, Arlene. (“Is that a hassock? is it for sale” she wrote in November. “these are just inspiration photos gee gee,” the account responded.)

But in the last week, the account has grown more formal, and the announcement of opening day Monday drew excitement from a who’s who of Brooklyn fashionistas. A post Tuesday about the village characters drew a different kind of reaction.

Wrote Susan Alexandra, the Jewish jewelry designer who recently opened her first storefront, on the Lower East Side of Manhattan, “Thank you for the village rabbi.”

Battered but Not Broken, Jewish Community in Odesa Carries on – Europe